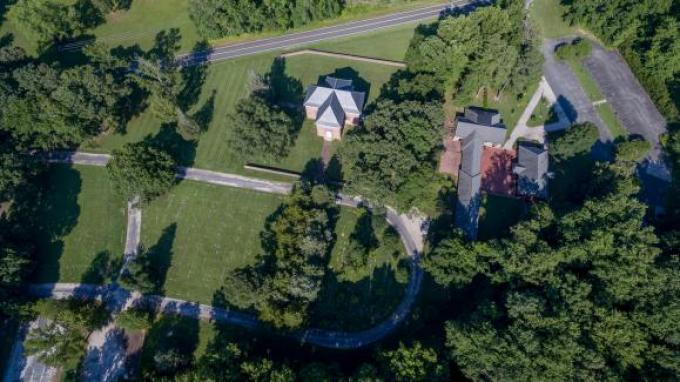 The Garden Club of Virginia’s (GCV) relationship with Historic Christ Church began over a half century ago. In 1965 the GCV selected Christ Church for its annual historic landscape restoration project. Under the direction of landscape architect Ralph E. Griswold, the GCV created the cedar allée, circular driveway and modern burying ground to the west of Christ Church. (Learn more here: Modern Burying Ground Turns 50 page 7)

In 2020 the GCV celebrated its centennial anniversary. To commemorate this milestone, the GCV selected sites around Virginia for a service day with Barlett Tree Experts. That April, Brandon Frazier and his team from Barlett’s Northern Neck office spent a day at Christ Church, pruning the large oaks in the churchyard and other trees that needed attention. GCV Restoration Committee liaison Dianne Spence and Foundation for Historic Christ (FHCC) Horticulture Committee chair Mary Hoerneman worked closely with Brandon. The FHCC Board of Directors passed a resolution that recognized the GCV’s anniversary and its numerous contributions to the grounds at Historic Christ Church since 1965. The GCV’s Centennial project included work at Wilton, Kenmore, and other sites as well as an exhibition at the Virginia Museum of History & Culture, which houses the GCV’s Restoration Committee papers and photographs.